Most popular Linux distributions from 2017 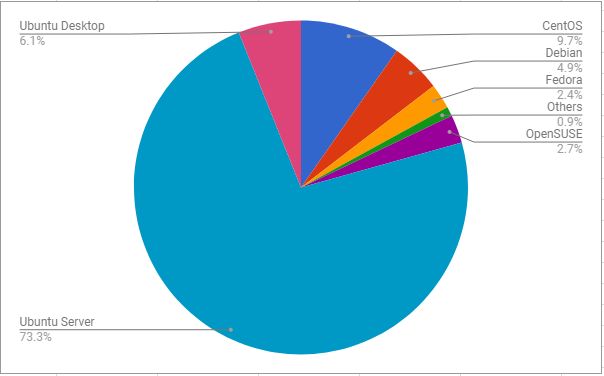 Which were the most popular Linux distros for the past year?

The choice of a servers distribution is more often driven by experience and background with one, but anyway taking a look at what were the most frequently used distros for the past year is always interesting and useful.

This year we see a definite favorite. With the largest piece of the pie – 73.3%, Ubuntu Server takes a severe advantage. For the last few years Ubuntu Server got a strong position in the Linux servers market. Due to its simplicity, popularity and vast amount of related information available Ubuntu again shows a leading position in the chart.

What is more interesting from the chart?

Well some of the other popular choises are CentOS, Debian,OpenSUSE and the interesting part this year is the good acceptance of Desktop distros in the cloud.

Since CloudBalkan has announced cloud hosted desktop Linux distibutions in mid 2017, they achieved a large popularity within cloud users. The convinience of using cloud based workstation with remote desktop appears to be useful and well accepted. The benefits are the obvious reliability, performance and scalability as well as staying connected to your workstation from virtually anywhere.

CentOS keeps it popularity for another year. Users often point out its stability and realtion to the enterprise Redhat as the key for their choice.

Debian is popular for the cloud servers and recently got a got amount of interest for the desktops.

OpenSUSE made a large improvement in popularity during the last year. With the third release in the Leap family, OpenSUSE proves its point as a wonderful, solid and well performing server distribution.

In 2018 we would expect to see pretty much the same interest for main players. What we are looking forward to see is the growing interest in desktop Linux distributions in the cloud. Our expectations are that a main driver in the server sector for 2018 will be security, and we are about to see how this will be handled.

Share your thoughts and suggestions on this topic with us under the social shares.